The contemporary issues confronted in DeCunto’s work provoke a response, both emotional and intellectual, and symbolize the struggle towards birth that our society now faces.

Giovanni DeCunto was born and raised in Lawrence, Massachusetts, once a large industrial center in America. The oldest of 3 siblings, coming from an artist background, his father was a house painter, and he was raised under modest means. His interest in art started at a young age. He says that he was born a painter. At the young age of seven, he displayed remarkable talent and ability to recreate nature. By the age of twelve, his work was being exhibited in local places and sold his first piece for $35. DeCunto moved out of his family’s home at 15 and began to support himself, living on the streets. After graduating high school early, he decided to follow his passion and study fine art. Despite his turbulent upbringing he prevailed and went on to create a substantial presence in the art world. 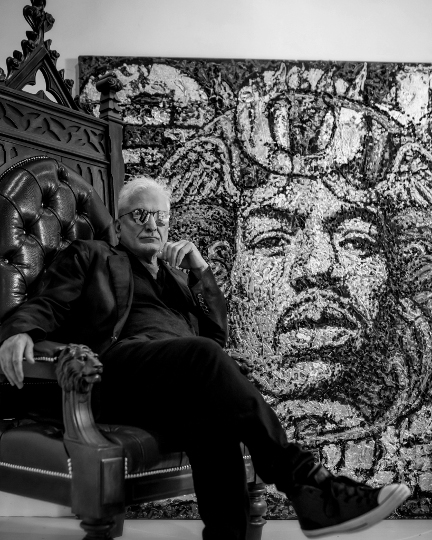 He began his studies at the Vesper George School of Art, studying commercial art there for a year, then transferred to The Art Institute of Boston and spent another year studying fine arts. He took time off from school and got an apprenticeship with Napoleon Setti studying color and design. Along his journey, he met a man named Eino Keerd. Keerd and his wife Vivian became DeCunto’s life mentors. They gave him guidance and direction in his life, Giovanni largely credits Keerd in this way. Boston University is where he perfected his classical and modern painting techniques. At BU he was taught under artists of that learned directly from the great German Expressionists. This training began to influence his art, realizing he is an expressionist. The German Expressionist style and movement still has an impact on his art today. In 1978, after graduating from BU, he accepted a fellowship with the University of Padua in Italy. During this time he focused on studying renaissance art and art history. Studying in Italy helped him digest everything he had learned thus far and began to combine it all to create his artistic voice. When he returned home to the US in 1989, he continued to learn under independent artists to continue to grow as an artist.

American artist Giovanni DeCunto is changing the course of modern art by developing an innovative method of painting to bridge the gap between the old and new. Resonating with the Baroque and contemporary painters, as well as being heavily influenced by culture and humanity. His work consists of abstract and representational forms made with acrylic paint – often poetic and gracefully formed and at times boldly colored – that hang in an uncanny, perfect balance, having had many significant accomplishments in his career. In 2016, DeCunto was awarded the key to the city of Lawrence, MA for his outstanding artwork. This award has only been granted to two other recipients, Robert Frost and Leonard Bernstein.

Giovanni DeCunto’s work can be found in museums throughout the world such as the Museum of Fine Arts in Boston MA, the Smithsonian Museum in Washington D.C., the Fogg Art Museum at Harvard University and The City Hall of Padua in Italy to name a few, as well as inside the private homes of high profile celebrities such as Lionel Richie, Shaquille O’Neal, Tom Cruise and George H.W. Bush.
[email protected]617-270-6089
116 South Street
Boston MA 02111